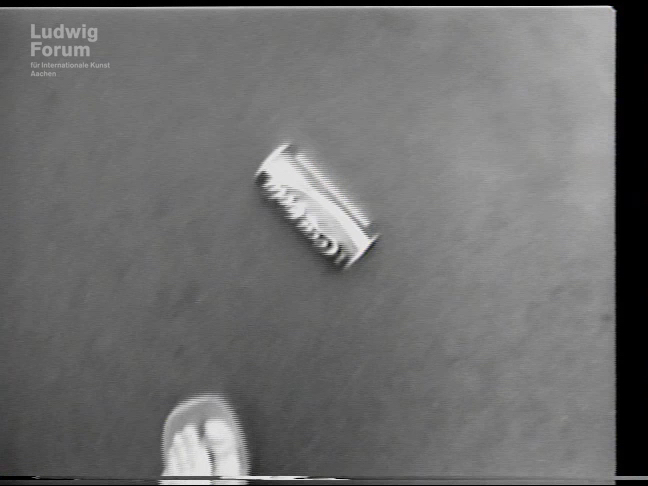 Kick the World depicts the act of walking through Miho Bunka Land, a theme park with miniature versions of famous buildings of the world, while kicking an empty cola can, recorded in a single take with a portable video camera. It is one of Nobuhiro Kawanaka’s pieces that combine video and performance with sound (of kicking the can) and image (Kawanaka’s perspective seen through the portable camera) in complete unison. In a text written about this piece, Kawanaka reminisces about playfully kicking around empty cans in his childhood. Part of Japan’s first wave of video art and a member of the artist group Video Hiroba, Kawanaka is mostly known for his production of diary-like films concerned with the everyday life and memories of the individual, while at the same time he continuously explores video’s possibilities as a medium able to facilitate collaborative production.

Nobuhiro Kawanaka is one of the pioneering artists of Japanese experimental film and video art. At the same time, he is also an organizer of important experimental films. First, I would like to discuss his relationship to experimental film. In the mid- to late 1960s, the Sogetsu Art Center actively introduced American underground films to Japan by organizing film festivals and screenings. Due to these efforts, underground films became very popular in Japan, and in February 1968, inspired by this popularity, the Japan Filmmakers’ Cooperative was founded to facilitate the distribution of filmmakers’ works. Kawanaka had already begun making films as part of a group called Generation 8, but started to fully participate in the experimental and personal film movement when he joined the leadership of the Cooperative. However, in July 1969, Kawanaka and Shigechika Sato left the Japan Filmmakers’ Cooperative due to internal conflicts. They continued their involvement in the screening of experimental and personal films, affiliated now with a different organization, the Japan Underground Center. This state of affairs continued for a while, but the popularity of underground films in Japan was already waning. Sato and Kawanaka began to have differences of opinion and chose to pursue separate paths. After splitting up with Sato, Kawanaka established a different Underground Center in August 1971 and proceeded to distribute and screen works on his own. His tireless efforts contributed to a rise in the number of experimental and personal filmmakers in Japan. In 1977, the Underground Center turned into the Image Forum and throughout the 1980s and 1990s introduced the rest of the world to Japanese experimental and personal films, a role it continues to fulfill today.

Apart from his involvement in the experimental and personal film movement, Kawanaka was deeply connected to the first wave of video art as a central member of Video Hiroba, a group of video artists founded in February 1972. The origins of Video Hiroba can be traced back to the previous year, when Canadian video artist Michael Goldberg came to Japan to trade and research video art in late 1971. Goldberg was amazed to find that even though Japan was home to large manufacturers of video equipment, video art groups were mostly inactive and little video art was produced there, with few exceptions like Kohei Ando or Toshio Matsumoto. He then negotiated with Sony, borrowed video equipment, gave lectures on the use of video to artists, and called for the creation of Japan’s first video art exhibition. The latter became the exhibition “Do it Yourself Kit,” held from February 24 to March 5, 1972, in the Sony Building in Tokyo’s Ginza district. The artists who participated in said exhibition in turn created Video Hiroba in order to continue their work after the exhibition ended. The central members were Katsuhiro Yamaguchi, Fujiko Nakaya, Hakudo Kobayashi, and Kawanaka. It is important to keep in mind that at the time these artists considered film and video different media. For them, experimental film belonged to the category of film, and video art to that of art and technology. Therefore, when creating works using video, Video Hiroba’s members strove to find ways of expressing themselves that were different from film and unique to video. This led to pieces combining video and performance (for example Katsuhiro Yamaguchi and Hakudo Kobayashi’s 1972 Eat) or projects using video as a social tool of communication (such as Fujiko Nakaya’s 1972 Friends of Minamata Victims – Video Diary). Video Hiroba continued to share an office and video equipment to carry out various projects for a while, though the group’s activities ended in 1975.
Kawanaka thus played a significant role in Japan’s first experimental film and video art movement. Next, I would like to discuss his individual works.

The Films of Nobuhiro Kawanaka

Kawanaka is mostly known for his production of diary-like films concerned with the everyday life and memories of the individual. In the 1976 16mm film Switchback, he attempts to explore people’s memories of earlier times by using frames taken from old newsreels and old picture postcards. The series Correspondence (1979–2005, 16mm; also using video in later years), begun in 1979 with Sakumi Hagiwara, or his shishōsetsu (“a private life novel”) series (1987–1992, 16mm) continue this trend.

However, looking at his filmography one notices a significant diversity of forms of expression among Kawanaka’s various works. His first 16mm piece, Assemble (1969), for example, makes use of overexposed footage of the Anti-Expo Kyushu Festival, shot on Double 8 film, that would normally have been discarded, and joins such parts together without separating the Double 8, thereby making visible the inner workings of film (Double 8 film is ordinarily cut in half). His film Play Back (1974, 16mm; a different video piece by the same name also exists) similarly examines the film production process. For this piece Kawanaka inserted the Lumière Brothers’ Arrival of a Train into an editing workstation and filmed its monitor while controlling the film’s movement, thus reconfiguring it.

Among Kawanaka’s works we hence find some that are concerned with individual everyday imagery and memory as well as others that foreground the mechanics of film itself. It may not be apparent at first glance how these different forms of expression are connected, but for Kawanaka they are. The following common points can be discerned: First, Kawanaka’s works that focus on the mechanics of film can be understood as an expression of his “memories of film,” formed by his frequent visits to movie theaters since childhood, rather than as conceptual products. Similarly, his pieces about individual everyday imagery are an expression of Kawanaka’s accumulated memories and a reflection of his own everyday life. If we reexamine his filmography from this viewpoint, a common creative motive emerges: Both types of works are connected to Kawanaka’s personal memories. At any rate, it was around the time of Switchback and Correspondence (mid-1970s) that Kawanaka began to make issues of memory and the everyday the center of his work. This trend continued through works like toki no e (“Time Images,” 1998, video/16mm), yume no e (“Dream Images,” 1999, video) and sora no e (“Sky Images,” 2000, 16mm) and into the present. Why was Kawanaka so drawn to issues of personal memories and everyday life? I suspect that the reason was his encounter with the medium of video.

The Videos of Nobuhiro Kawanaka

As mentioned above, Kawanaka was a part of Japan’s first wave of video art and through his work with Video Hiroba began to share his personal memories and daily life with others.

In 1965, Sony began selling its Portapak video equipment to consumers. The Portapak enabled individuals to use video to disseminate information and opinion. In contrast to mass media represented by TV broadcasts, the first wave of video art spread with the social objective of forming an alternative medium consisting of and combining a multitude of individually produced pieces. In North America, Michael Shamberg and the Raindance Corporation’s text Guerrilla Television became a centerpiece of video art as this kind of social movement, and their thinking influenced Japanese video art as well (Guerrilla Television was translated into Japanese by Fujiko Nakaya under Kawanaka’s supervision). Kawanaka’s contact with early video art would open up a path of collaborative production to him.

Out of the above, I have seen recorded footage only of Play Back 1 and Play Back 7. Play Back 1 is a performance that captured Kawanaka’s motionless profile and his upright index finger and slowed the video image down within a monitor. Play Back 7, too, is a performance slowing down found footage within a monitor while Kawanaka is talking to a friend. Through these experiences Kawanaka likely discovered video as an intermediary for collaborative production. Henceforth he understood artworks made using video as containing possibilities distinct from those of films. Video can connect individuals and relay events. Kawanaka used these advantages of video to explore, with the members of Video Hiroba, its possibilities as a medium able to facilitate collaborative production. Such exploration was undertaken in social video projects produced by Video Hiroba, like the 1973 shin jūmin sanka no gihō (“New Techniques for Popular Participation”), which surveyed residents’ opinions regarding district redevelopment. Such collaborative production and video projects eventually gave birth to works like Correspondence and shishōsetsu (“I Novel”), which exchange and share with others memories and everyday imagery.

Kawanaka also produced single-channel video pieces. Postcard (year of production unknown) shows repeated images of fingertips examining old picture postcards under a magnifying glass. Due to its similarity to Switchback, it is assumed to have been made prior to 1976. One might call it the original blueprint for works examining people’s memories of earlier times through film. Kick The World (1974) depicts the act of walking through Miho Bunka Land, a theme park with miniature versions of famous buildings of the world, while kicking an empty cola can, recorded in a single take with a portable video camera. It is one of Kawanaka’s pieces that combine video and performance with sound (of kicking the can) and image (Kawanaka’s perspective seen through the portable camera) in complete unison. In a text written about this piece, Kawanaka reminisces about playfully kicking around empty cans in his childhood.